"When the 33-year-old Michelangelo was painting the Sistine Chapel ceiling, Pope Julius II would impatiently ask him when it would be complete. The artist would reply, "When I am satisfied." Rodin took 37 years to compete his Gates of Hell. The Taj Mahal took 22 years, two more that the Great Pyramid at Giza. The Great Wall of China took 2,000 years!"

Artist Durriya Kazi explores our relationship to time, and the value of slowing down. 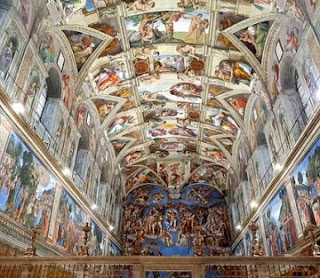 One could say that these were commissioned by the rich and powerful, but then there are the living root bridges of Indonesia and North East India, made by villagers for their own use, that can take at least 15 years to complete.

The concept of time has changed very dramatically. Time was once measured by the movement of the sun. Daytime was for activity, night for rest. The sundial measured the hours of the day. Most people would just guess the time of day by looking up at the sky.

Hourglasses, measuring candles and water clocks were some of the devices that measured time independently of the sun. Bells marked the eight daily prayer times for Bendictine monks and gave the name to clocks from the Latin word for bells — clocca. The mechanical clock made natural time completely irrelevant. People started carrying time on their wrists, charging their services by the hour, using alarm clocks and travel schedules.

The quartz-crystal clock, invented in 1928 by WA Marrison, changed yet again how time was measured. Quartz crystals can vibrate at millions of times a second, allowing time to be measured up to a millionth of a second. Races at the Olympics can be won by one millisecond.

This ability to manage time gave birth to the desire for speed. Until recently, when Covid slowed things down, speed was the measure of success. Cars are marketed for the speeds they can reach and how quickly. We design faster air travel, bullet trains, speed boats. Employees are stressed with the need to meet deadlines. Multiple Choice Question examinations judge ability by the speed of processing answers. We are told of the wonderful rush of adrenaline when we ‘floor the pedal’ in our daily tasks, our exercises, our educational growth.

Daniel Kahneman, in his bestseller Thinking, Fast and Slow, emphasises the need for both fast thinking — often automatic actions, such as judging distances when driving — and slow thinking — deliberation to thoroughly examine a matter, to understand all possibilities, before coming to any conclusion. It may be as simple as parking a car in a tight space or making a decision about a business strategy. Thinking fast means the mind will turn to prior solutions. Thinking slow allows new ideas to emerge.

There is a general perception that slowing down is wasting time or indicates laziness, while science suggests it is an important way to replenish the mind and generate new ideas. It is possibly more productive than communicating at the rate of 1,000,000,000 bits a second on one’s digital device.

Art, even when a work is made at great speed — as Sadequain and Picasso often did — evolves out of a painstaking process of practice and formation of ideas. Art and photography can, quite literally, stop time by capturing a moment. We are fascinated by slow motion images, as they allow us to see the details we would otherwise miss.

Here lies the value of slowing down — to notice, observe, process and evolve our responses, whether we are paying attention to our children, our friends and life partners, or conducting market research, writing a journalistic report or planning a strategy for peace.

We save time by making time. The Swiss saying goes, “No shortcuts today, I am in a hurry.”

The World According to Joe
It’s not important who we are, just how we think. For those astrologers, I am a Gemini so most of the time I can see multiple points of view.